Cinnamon - One of the healthiest spices in the world!

The use of cinnamon goes back to ancient Egypt. It was used as medicine, as a spice and as an embalming agent. Cinnamon was considered more precious than gold and was once traded as currency. Some of the earliest mentions of cinnamon are in the bible. The spice comes from the inner bark of a small evergreen tree called 'Cinnamomum'. The bark is peeled and laid in the sun to dry, it then curls up into rolls known as cinnamon sticks. This spice has a sweet pleasant flavour and warm smell which makes it a popular addition to baked treats, desserts and savoury dishes, like curries.

The potential health benefits of cinnamon are nothing short of astonishing. The essential oil found in cinnamon bark is called cinnamaldehyde, it has antiviral, antibacterial and antifungal properties. Cinnamon also contains large amounts of polyphenol antioxidants. Antioxidants can help protect the body from disease, plus this type of antioxidant has been found to have anti-inflammatory properties. This is truly an exceptional spice that we should be consuming daily. The purest and healthiest for us is consume is Ceylon (verum) cinnamon, native to Sri Lanka. 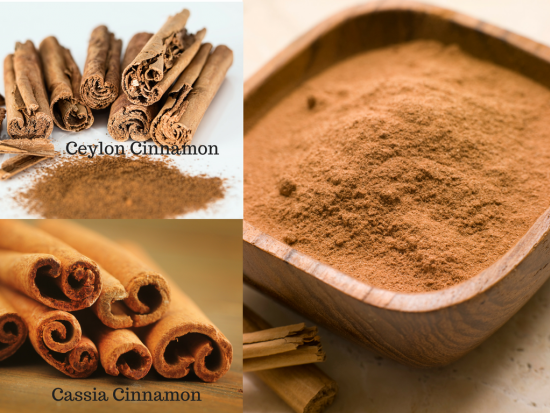 Some of the Health Benefits of Cinnamon

Regulates Blood Sugar: Cinnamon helps stabilise energy levels and moods and is a great choice for diabetics and hypoglycemics.

Anti-Clotting: An important health benefit of cinnamon is its anti-clotting ability. This comes from cinnamaldehyde, which stops unwanted clumping of blood platelets.

It can reduce LDL Cholesterol Levels: LDL is also know as the bad cholesterol, lowering it reduces the risk of heart disease.

Cinnamon has antifungal, antibacterial and antiviral properties: It can be used as part of a treatment for anything from lung problems to the common cold. Cinnamon is a natural preservative and was used to prevent food spoilage that frequently happened due to the lack of refrigeration in the Middle Ages.

It has anti-inflammatory properties: By adding cinnamon to a regular diet, studies have shown it can reduce inflammation. It can help treat certain types of pain and headaches, including arthritis. It can also boost circulation, this helps stimulate and push circulation to the joints, therefore helping joint and arthritis pain.

Cinnamon can help treat the symptoms of Alzheimer's and Parkinson's: These are two conditions that, for the moment are incurable. A great part of the treatment is therefore in symptom management and studies have shown the addition of cinnamon to the diet can help reduce some of the symptoms.

Here are a few of my favourite recipes to help you get more cinnamon into your diet:

A recipe for Honey, Cinnamon and Lemon drink - this warm drink can improve digestion, cleanse your body and help with colds and flu.

There are different types of cinnamon and they are not all created equal. Ceylon (verum) and Cassia cinnamon are the two varieties that you need to recognize the difference between when you are purchasing cinnamon. Ceylon cinnamon known as 'true cinnamon', is native to Sri Lanka and southern parts of India. Ceylon is a tan-brown colour and has a mild sweet flavour, it has soft flaky layers and is more expensive and harder to find. Cassia cinnamon known as 'fake' or Chinese cinnamon, originated in Southern China. Cassia has a stronger spicy flavour and has a dark brown-red colour with thicker sticks, they curl into rolls when dried and not in layers like Ceylon 'real' cinnamon. Cassia is very cheap to produce and is the type most commonly consumed around the world and sold in supermarkets. While there are definitely colour, taste and texture variations between Ceylon and Cassia cinnamon, the health differences are minor unless you plan to consume excessively large amounts every single day. Cassia contains a compound call 'coumarin' which could be toxic if consumed in excessive amounts, Ceylon has undetectable amounts. I purchase my organic Ceylon (verum) cinnamon online to make sure I get the best and purest for my body, as supermarkets don't usually state which variety is in the bottle.

How much should we consume daily?: Recent studies has shown 1 - 3 teaspoons of cinnamon on a daily basis is recommended for health benefits.

How best to store cinnamon: Cinnamon needs to be kept in an airtight container in a dark place. Whole sticks will last longer, ground cinnamon will start to lose flavour after a few months. Stale cinnamon = cinnamon of reduced flavour and health benefits. It's worth going through your cupboards to check the use by dates, as the fresher the better.

Cinnamon has a naturally sweet taste and being void of sugar, is perfect to sweeten a recipe without adding lots of sweetener. I'm a lover of cinnamon and add it to everything from breakfast to dinner, I can never get enough. Try my recipes linked above and not only enjoy the flavour but the many health benefits of delicious cinnamon.